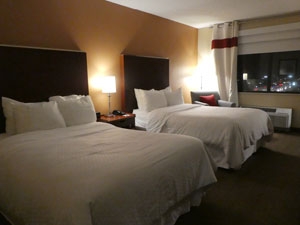 When looking for an affordable hotel near Boston’s Logan Airport we chose Four Points by Sheraton.

We were passing through Boston having flown in from Reykjavik (Iceland) and spent one night near the airport before hiring a car the next day for a road trip down the coast to NYC.

Arriving at Logan Airport we took the free shuttle bus to the hotel, although the hotel wasn’t as close to the airport as we thought – it was 4.5 miles away.

On arrival at the hotel we had a quick check in and were allocated Room 709 on the 7th floor.

The room was a good size with two very comfortable double beds with feather doonas and pillows. There was also a long timber desk plus office chair and a good lamp. WIFI was complimentary. We had tea and coffee (coffee machine) plus ice bucket and water. There were some very good brochures on sights to see in Boston.

A console with TV on top included a microwave oven, bar-sized fridge (not a mini-bar) and a couple of drawers.

Windows in the room could not be opened for fresh air however we were able to control the air-conditioning inside our room.

The wardrobe included an ironing board and iron plus a luggage rack.

The bathroom was also a good size with plenty of bench space on the vanity. The shower (nice and strong) was over the bath. A good, powerful hair dryer was supplied.

Toiletries were generous and there were three dispensers above the bath for soap, shampoo and conditioner.

A very good hot breakfast was included in our rate – in the breakfast room on the ground floor.

The hotel features a well-equipped gym, indoor swimming pool, an ATM in the foyer, and a couple of computers plus printer for guests on the ground floor.

One of the best features of the hotel is the Bisuteki Japanese Steak House and Sushi Bar on the ground floor (we would call it tepinyaki-style cooking). We enjoyed a delicious meal, sharing a table with other guests in the hotel and were entertained by the chef who cooked our meals on the hot plate in front of us.

Opposite the Japanese restaurant there was a bar area that served light meals.

There was a small set of shops near the hotel but no restaurants to speak of, so being able to eat well in the hotel was appreciated.

We can recommend a stay at Four Points by Sheraton, Logan Airport for the clean, well-sized rooms and the Japanese restaurant.