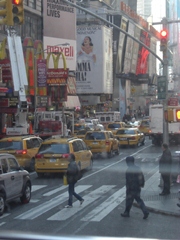 Winter is a good time to visit New York City. It is the quietest season when it is less crowded, there are no queues, hotel prices are reduced and the city looks beautiful when it snows.

We spent a week in New York City in January 2010. If travelling at that time of year, if possible we recommend arriving before 10 January so that you can see the Christmas lights throughout the city (on this trip we missed them but had loved seeing them on a previous visit).

To familiarise ourselves with the city we initially took a Gray Line Hop-on Hop-off bus tour. We recommend doing the Downtown Loop plus the Uptown Loop, each taking about 2 hours. 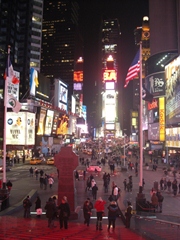 Having taken the tours, we then returned to places of interest:

The heart of Times Square is at the triangle formed by Broadway, W47th Street and Seventh Avenue. (You will see this location on maps of Manhattan as Duffy Square.) Best seen at night, walk up the red steps to the top of the Half TKTS building and look back at the fabulous view of neon lights.

The term Times Square is often used for the area stretching from W40th Street to W53rd Street and takes in the Theatre District – see the Official Times Square website interactive map. We saw two good shows while in NYC – Jersey Boys and Chicago.

You will save money by buying tickets at Half TKTS either in Times Square (short queues in winter) or TKTS Seaport, down near the harbour, where there was no queue at all. 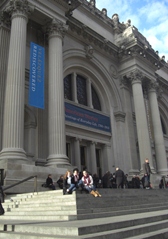 Overwhelming in its size and number of artworks, we recommend making a plan here! Pick up a map when you purchase your admission ticket and decide what you will try to see – we started by wandering through but it was easy to get lost.

We enjoyed the 19th Century European painting galleries on the 2nd floor, the French and English period rooms, the American Wing, the Temple of Dendur on the 1st floor (the main floor) and a visit to the Cafeteria on the Ground Floor for lunch. That was about all we could take in for one day.

The Met is a wonderful museum and we can highly recommend a visit. It is usually closed on Mondays.

From the Met you can walk across Fifth Avenue to the Guggenheim for a completely different experience. Small and intimate by comparison to the Met, we loved this beautiful building and gallery. It is worthwhile taking the headphones offered when you buy your ticket and walking through the gallery listening to the commentary.

The Guggenheim is usually closed on Thursdays.

If you enjoy galleries, also try to visit MOMA which is located in midtown Manhattan, at 11 West 53rd Street between Fifth and Sixth Avenues, telephone (212) 708-9400.

MOMA is also a large gallery, although not as big as the Met and not as small as the Guggenheim. There are six levels of galleries plus two levels of theatres however it is not overwhelming and it’s easy to make your way through each level.

We suggest starting at the top and working your way down:

MOMA is usually closed Tuesdays (except in Summer).

We spent an enjoyable evening skating in Central Park at the Trump Wollman Skating Rink. Lovely views of the city at night.

We recommend doing a tour of the United Nations. Guided tours are conducted Monday to Friday from 9:45am to 4.45 pm and last about one hour and include a visit to the General Assembly Hall. 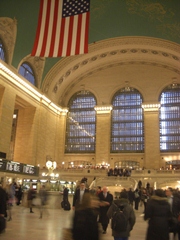 This is a famous NYC landmark and is impressive inside and out. Self-guided walking tours or audio tours are available. Many movie scenes have been filmed at Grand Central Terminal including Men in Black, Gossip Girl and Superman.

While dusk is a good time to visit the Empire State Building, we went one evening after dinner – there was not one single person queueing! Views were stunning.

After the Staten Island Ferry ride we recommend taking a walk through the financial district of NYC – Wall Street and the New York Stock Exchange.

While in this part of the city, you may want to visit Ground Zero. It is a construction site at the moment however a Memorial Museum is due to open on 11 September 2011. In the meantime you can visit the Tribute WTC Visitor Center at 120 Liberty Street.

Shopping in New York City can be overwhelming. Where do you start?

In the short time we had in New York, we visited the shopping area of Soho. We recommend taking the subway to Prince St station which takes you to Soho and a whole host of great shops lining Broadway. Towards Canal Street you will find Dean & De Luca (for food), H&M, Uniqlo, Levi’s, Gap, Bloomindales and Topshop.  Heading in the other direction (towards Houston Street) you will find American Outfitters, Zara and Express.

Near Central Park and Fifth Avenue

We recommend starting at the Plaza Hotel then cross the road to FAO Schwartz, a wonderful toy store. Close by is the Apple store which is worth a visit. For sightseeing rather than shopping, we loved strolling down Fifth Avenue. Between 49th and 50th Streets you will see some of New York’s most expensive shops including Bergdorf Goodman, Saks and Tiffany & Co.

We recommend a visit to the big department stores, Macy’s and Bloomindale’s, where you should enquire about a discount card for overseas travellers. At the time of our visit the discount was 10%.

To find out about shopping in New York City, it is a good idea to do some research before your trip by looking at websites such as Frommer’s Top Shopping Streets & Neighbourhoods for an up-to-date guide.

Every morning we would have breakfast at the Olympic Restaurant – a diner just around the corner from the Belvedere Hotel, near Times Square. Don’t be put off by the less-than-flash exterior. The Olympic served a great breakfast at good prices and we got to know the staff who treated us like long-lost friends. The Olympic is at 809 8th Avenue, New York, NY 10019-7418, telephone (212) 956-3230.

If you are staying in the vicinity of Tribeca, Bubby’s at 120 Hudson Street, Tribeca, was also recommended by a local.

We chose to stay at the Belvedere Hotel in mid-town Manhattan. Booking one of the executive guestrooms is recommended as they have recently been refurbished.  There were four of us – two adults and two teenagers. Our Double Executive room was good value for money as we could all share the one room (two double beds). The room also had a kitchenette with microwave and refrigerator which could be useful for families with young children but unfortunately there is no cutlery or crockery provided. The Belvedere Hotel is two blocks from Times Square and a block from Broadway theatres.

While we did a lot of walking and that was the best way of experiencing the city, if we had to travel far we took taxis as it was so cold. We bought down jackets and snow boots while in the US however the cold is hard to take on exposed cheeks and noses!

New York is such a big city it is a good idea to buy a guide book. We can recommend a small book called Lonely Planet’s New York Encounter which also includes a map. We bought it in Sydney for $19.99 and it proved invaluable.