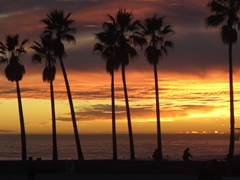 On an extended trip to the US, we spent four nights and three days in Los Angeles. There wasn’t too much idle time, however it was the beginning of our trip and we thought we were fresh enough to see a lot in a short time.

After much research we chose to stay at the Elan Hotel in West Hollywood based on price and location. While our room was small (there were four of us sharing a room), the staff were friendly, continental breakfast was good and each afternoon there was complimentary wine and cheese.

We had a car and planned to visit Beverly Hills, Hollywood, Universal Studios, Venice Beach/Santa Monica and Disneyland. With the exception of Disneyland, our accommodation was very close to all we wanted to see.  The only downside was that we found the valet parking expensive and a little inconvenient so we chose to park on the street. If you do park on the street, take note of the parking restrictions.

We were keen to see the Hollywood Walk of Fame. As expected it is very crowded but fun nevertheless. The Walk of Fame runs about 2kms along Hollywood Boulevard. The stars of the most famous celebrities are located in front of Grauman’s Chinese Theatre and Oscar winners are usually in front of the Kodak Theatre (home to Academy Awards presentations). 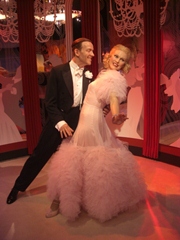 While in this area we recommend taking a tour of the Kodak Theatre.

From Hollywood Boulevard we also recommend taking a Starline tour of movie star’s homes. This is a 2 hour narrated tour in an open vehicle. We saw homes (and former homes) of people including Michael Jackson, Elvis Presley, Jennifer Aniston, Jennifer Lopez, Diane Keaton, Hugh Heffner, Lucille Ball and Nancy Reagan. We drove along Sunset Strip (Viper Room, Whiskey a Go Go, the House of Blues) and Rodeo Drive (famous boutiques and Beverley Wiltshire Hotel). On the tour of the star’s homes you will see people sitting in the streets selling maps showing the locations of star’s homes so if you are keen you can go back, buy a map and do your own tour.

Our tour ticket also included free entry into Madame Tussauds Hollywood. This turned out to be a surprisingly fun experience and can be recommended. It was completely different to Madame Tussauds in London. In Hollywood you can sit on a sofa with Will Smith or next to Cameron Diaz or pretend to have tea with Audrey Hepburn. A great place to take photographs ‘with the stars’.

If these types of places are of interest, you may consider buying a CityPass which gives you admission to 4 Hollywood attractions:

It was great fun to stroll down Rodeo Drive to see the upmarket boutiques. For us it was a place for window shopping and people watching. We also enjoyed visiting the Beverley Wiltshire Hotel.

We spent New Years Eve at Universal Studios. It was crowded but we enjoyed:

To reduce time spent in queues, you might consider getting a Front of Line pass.

We ended the day at Universal Studios CityWalk, an area outside Universal  Studios Theme Park, where you will find restaurants, shops and cinemas. We had dinner there but because it was New Years Eve it was very crowded and hard to get into restaurants. We love Japanese food and were eventually able to get a table at Wasabi, which we can recommend.

We had been told to watch the midnight fireworks display, however we were disappointed to see just a few colourful rockets go off. Having experienced the Sydney New Year’s Eve fireworks, we were very spoilt!

We were keen to see the well-known landmark and drove out at the end of the day to walk along the beachside boardwalk. There were certainly all kinds of people about but we found it a bit seedy. The sunset was sensational.

A bit further on you will come to Santa Monica. This is much more upmarket than Venice Beach. There is a good selection of restaurants however most are expensive. We had dinner at Gate of India Restaurant (115 Santa Monica Blvd) which was reasonably priced by comparison. It was okay. After dinner we took a walk to Santa Monica Pier. 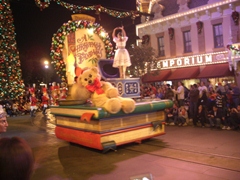 Disneyland is located at Anaheim, 36.5 miles or 45 minutes driving time from our West Hollywood hotel. It is a big day out.

We suggest you have a look at the Disneyland Resort website before your visit to get an idea of what is on offer and the scale of the place. There are actually two theme parks: Disneyland Park and Disney California Adventure Park plus a hotel district and downtown district for dining, shopping and entertainment.

It is impossible to see everything in one day so if Disneyland Resort appeals to you, it would be a good idea to stay there or in a hotel in Anaheim and enjoy the whole experience.

On arrival, we found signage and directions to the car parks very good. The scale of the place is overwhelming. Once you have parked your car, you will take a trolley to the entrance of Disneyland. Be sure you take note which car park you are in and the level you are on!

We spent the day wandering through the different ‘lands’, on rides and seeing shows. It was New Year’s Day so it was crowded. If you don’t like queuing you might like to check out the FastPass – a machine gives you a ticket with a time frame to return on it that allows you to ride an attraction without waiting in a long line.

It is worthwhile staying for the Grand Parade along Main Street in the early evening. Disneyland can be an overwhelming experience. The best advice is to do a bit of planning before you go, realise you won’t see everything and just try to enjoy the moment.

Los Angeles to San Francisco on Highway One

If time permits, something you may consider is to drive between Los Angeles and San Francisco along Highway One. We would recommend at least a couple of days for this trip so that you can stop to see Malibu, Santa Barbara, Hearst Castle, Big Sur and Carmel. Just to give you an idea of driving time along the coast between LA and San Fran, it is about a 9 hour drive without stops.

We drove from LA to Carmel in one day with a stop at Hearst Castle to do a tour plus a stop for a flat tyre! It was really too rushed hence the recommendation to take a couple of days.